Healthy tiramisu recipe that worth to be addicted to. No sugar, gluten free Tiramisu blended into chocolate low carb cheesecake.

As I recently have a little time, I had been searching on the internet the other day. In search of new, exciting ideas, inspiring meals that I’ve never used before, to impress my family with. Looking for quite some time but could not come across too many interesting things. Just before I thought to give up on it, I stumbled on this scrumptious and easy dessert by chance. The dessert seemed so mouth-watering on its snapshot, that called for immediate actions.

It was not so difficult to imagine the way it is made, its taste and just how much my husband is going to want it. Mind you, it is rather easy to delight the man in terms of cakes. Anyways, I visited the blog: Suncakemom and then followed the step-by-step instuctions which were combined with impressive snap shots of the process. It just makes life quite easy. I could suppose it is a bit of a inconvenience to shoot snap shots in the midst of baking in the kitchen as you may most often have gross hands and so i really appreciate the time and effort she put in to build this blogpost and recipe easily implemented.

With that in mind I’m empowered presenting my personal recipes in the same way. Many thanks the idea.

I was tweaking the initial mixture to make it for the taste of my family. I must mention it had been a terrific outcome. They enjoyed the flavor, the structure and enjoyed getting a sweet like this in the middle of a hectic week. They quite simply asked for lots more, many more. Thus the next time I’m not going to make the same mistake. I am likely to multiply the volume to get them delighted.

The tiramisu Cheesecake recipe is provided by SunCakeMom 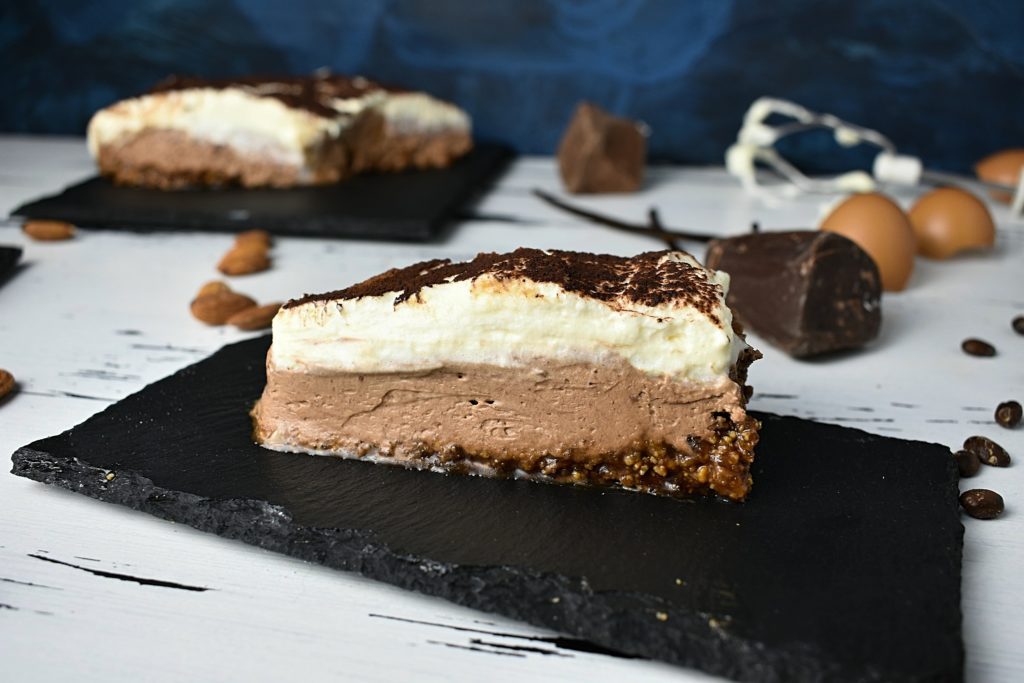 Pour all of these ingredients into a medium size mixing bowl and blend them together until it’s mixed properly.

Prepare cake tin by covering in with parchment paper.

Prepare chocolate layer. Break and place chocolate into a small pan on top of a slightly bigger pan of simmering water to melt.

Meanwhile crack and separate eggs. Beat yolk until light yellow. Fold in mascarpone and keep beating it. The cream needs to have smooth consistency.

Take melted chocolate of the heat and leave it cool a little bit.

Whilst chocolate is cooling, we have some time to beat egg whites until hard peeks form.

By the time we finish whisking egg whites the chocolate is cool enough to fold into the mascarpone-yolk cream mixture. Fold it in carefully.

Finally fold egg whites into the chocolate mixture. This is a difficult step.

Pour chocolate cream into the cake tin and spread it evenly.

Continue with the top layer. It’s basically repeating the method we used with the chocolate layer, but instead of chocolate, put the vanilla extract and optionally the agave syrup or other sweetener into the mascarpone mixture.

Which is the following: Separate eggs. Put them into two mixing bowls. Beat egg whites in one until hard peaks form. Whisk yolk with vanilla extract and optionally agave syrup or other sweetener until it has a light yellow colour. Mix mascarpone with the yolk to get a smooth cream. Fold in the egg white carefully. And that’s it.

Healthy tiramisu is ready to put into the fridge for a couple of hours.