Looking for something for Lent or just a sweet bread to pass the day? Hot cross bun will cover both and keep the house safe!

As I currently have a little time, I had been searching on the web last week. On the lookout for fresh, challenging thoughts, inspirational recipes that I’ve never tasted before, to surprise my family with. Searching for quite some time yet could not find lots of interesting things. Right before I thought to give up on it, I ran across this tempting and easy treat by chance. It looked so tempting

on its snapshot, it called for fast actions.

It absolutely was not so difficult to imagine how it is made, its taste and how much boyfriend might enjoy it. Actually, it is extremely easy to please the guy in terms of treats. Anyhow, I went to the webpage: Suncakemom and then followed the precise instuctions that were accompanied by great images of the operation. It really makes life less difficult. I could suppose it is a bit of a effort to shoot pics in the midst of baking in the kitchen as you ordinarily have sticky hands so I genuinely appreciate the commitment she put in to build this blogpost and recipe easily followed.

With that in mind I am empowered presenting my very own formulas in a similar way. Many thanks the idea.

I had been tweaking the main formula to make it for the taste of my family. I’ve got to mention that it was an awesome success. They loved the flavor, the thickness and loved getting a sweet like this during a stressful workweek. They quite simply wanted even more, many more. Hence the next time I am not going to make the same miscalculation. I’m going to twin the volume to make them pleased.

This hot cross bun recipe was first published on Suncakemom. 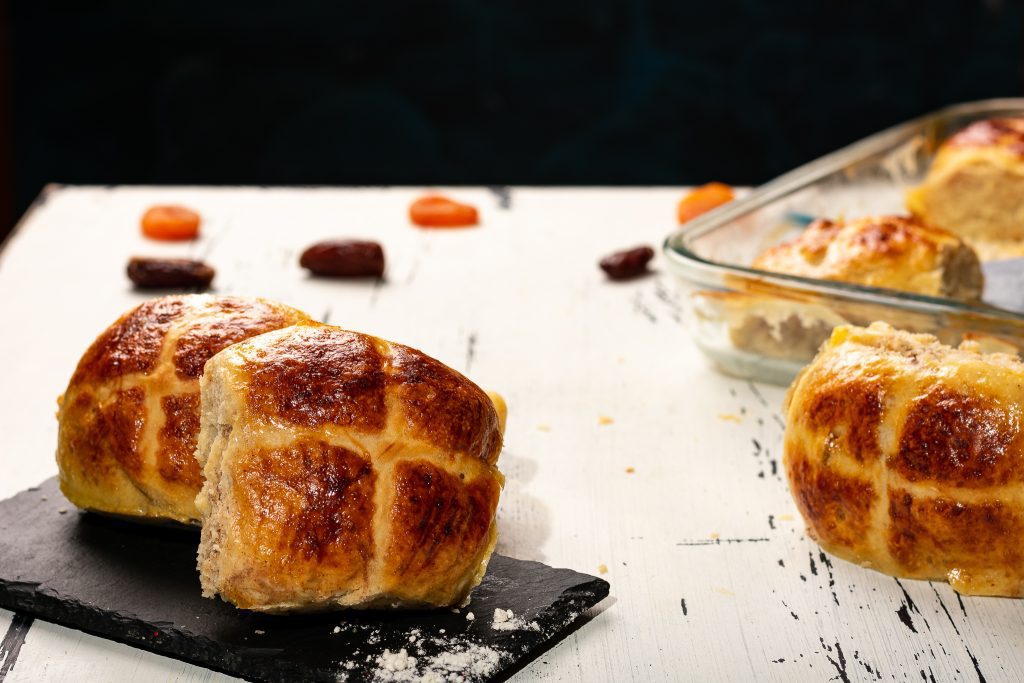 Warm milk up and put the yeast in to dissolve.

Pour in the yeasty milk as well.

Knead ingredients until dough comes together and it separates from the bowl. Mixer and dough hook can be used for this step.

Put the dough in a lightly oiled bowl. Cover and leave it to rise in a warm place for 45 minutes or until doubled in size.

Take dough out of the bowl on a lightly floured surface and flatten it a bit by hands, spread raisins, orange peel, orange zest, chopped apple and cinnamon on top evenly.

Fold filling in the dough and put it back in the bowl and cover it.

Leave to rise for another 45 minutes or until doubled in size.

Divide the dough into 16 equal pieces.

Roll them into smooth balls.

Put balls into the baking tray leaving them some space to expand. Don’t put them too far away from each other though.

Cover it and leave for another 20 minutes to rise.

Put a deep tray with water at the bottom of the oven so buns will bake in steamy hot air.

After 20 minutes give buns an egg wash.

Mix the flour with the water to make the paste for the cross.

Put the paste into a piping bag to decorate the buns with the cross.

Brush over the top of buns before putting the tray in the preheated oven.

Bake it for 20 minutes or until the top is golden brown.