Chocolate sponge cake split up with layers of irresistible whipped cream and spin around with the summery flavors of cherry.

As I lately have some time, I had been looking on the internet a few days ago. In search of fresh, exciting tips, inspiring recipes that I have never tried before, to amaze my family with. Hunting for a while yet couldn’t discover any interesting stuff. Just before I thought to give up on it, I stumbled on this fabulous and simple treat simply by accident on Suncakemom. The dessert looked so delicious on its photo, it required rapid action.

It absolutely was not difficult to imagine how it is made, its taste and just how much my hubby is going to love it. Actually, it is quite simple to delight him in terms of desserts. Anyway, I went to the website and then used the detailed instuctions that have been accompanied by superb graphics of the method. It just makes life much simpler. I can imagine that it’s a slight hassle to shoot pics in the midst of baking in the kitchen as you may typically have gross hands therefore i seriously appreciate the time and effort she devote to build this post and recipe conveniently followed.

With that in mind I am empowered presenting my personal dishes in a similar fashion. Many thanks for the thought.

I was fine tuning the main mixture create it for the taste of my loved ones. I must tell you it absolutely was a great success. They enjoyed the flavor, the thickness and loved getting a treat such as this during a lively week. They basically wanted lots more, a lot more. So next time I’m not going to commit the same miscalculation. I am going to multiply the quantity to make them happy. 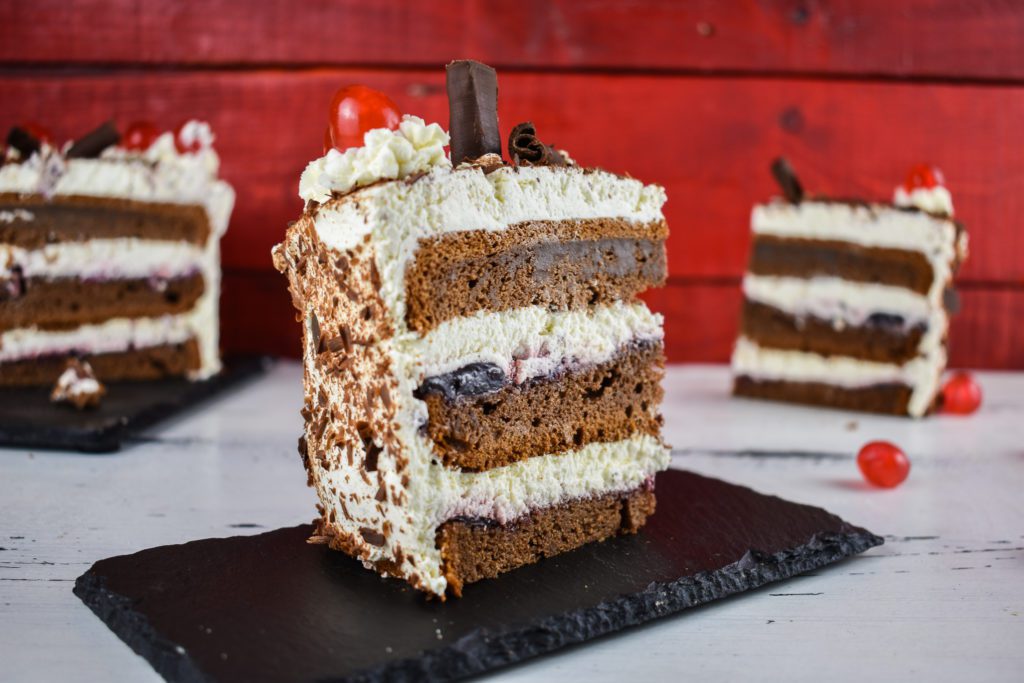 Measure flour and mix baking powder with it.

Melt chocolate in a small bowl, placing it onto a slightly bigger bowl of steaming water. Stir it gradually. When it’s melted take it off the heat and let it cool a bit before mixing it with the other ingredients.

Separate eggs and put them into two different mixing bowl.

Next beat butter until soft and fluffy. Put honey and vanilla extract into it as well.

Beat yolks until fluffy and light yellow so it’s ready to add to the butter.

Alternate flour, melted chocolate and yolks whilst mixing them with the butter. Incorporate them well.

As a final step, fold egg whites to the mixture.

10. Pour batter into the tray and stick it into the preheated oven for about 40 minutes or until tooth pick comes out clean.

11. When it’s out of the oven, place it on a cooling rack until it completely cools down. Don’t try to work with it even if it’s only slightly warm as it would ruin the whipped cream’s texture thus the whole cake.

In a bowl mix jam and the liquor.

In a different bowl beat the whipped cream until hard peaks form.

Spread 1/3 of the jam on the bottom part of the cake.

Spread 1/4 of the whipped cream on the bottom of the cake on top of the jam.

Place the second layer of the cake on top of the 1st layer of whipped cream.

Repeat spreading the jam and the whipped cream on the second layer.

Put the third cake layer on top of the second whipped cream layer.

Spread the remaining 1/3 of jam on top of the last cake layer and 1/4 of whipped cream on top.

Divide the rest of the whipped cream into two parts and spread one part on the side of the cake.

Sprinkle chocolate flakes on the side and the top.

Fill a pastry bag with the remaining whipped cream and decorate the top of the cake by squeezing the cream out gently.

10. Place the cherries on top of each whipped cream decoration.

11. Optimally, the cake should rest in the fridge until the whipped cream locks the layers together for about 6 hours.